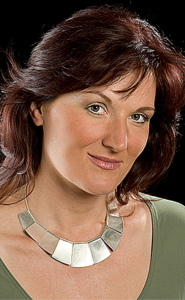 ... born in Schwarzenberg/Erzgebirge, discovered her love of music already as a child. At the age of 14, she passed the entrance exam for a special class for music in Zwickau with the goal of becoming a music teacher. After completing high school in 1986, she initially studied music and history at Humboldt University in Berlin. Four years later, she studied voice at the Hanns Eisler Academy of Music in Berlin. Since then, the mezzo-soprano has been a sought-after and internationally successful musician.

Her repertoire is extensive and diverse. Lieder evenings and concerts have taken the singer to some of the most beautiful stages in the world. Thus, among other works, the (multiple) winner of the Robert Schumann Singing Competition sang Handel's Messiah under Reinhard Göbel at the Gewandhaus in Leipzig. Her performance and singing at the Staatsoper Berlin in the Richard Strauss opera Des Esels Schatten was as passionate as her appearance in the musical Fritz Schwigerling based on Frank Wedekind at the Theater of the East.

Her career has also included numerous radio and television recordings as well as international tours, most recently in Japan with the Berlin State Opera. As an alto with the Rundfunkchor Berlin she worked with Kent Nagano, Sir Simon Rattle and Kurt Masur. During this period, the choir was the recipient of the Grammy Prize (2008) for Brahms’ German Requiem and a year later for Stravinsky’s Symphony of Psalms.

Finally, the trained music teacher and vocal coach takes pleasure in sharing her experience and knowledge as a performer with younger singers and in her work as vocal coach for the Berliner Konzert Chor.