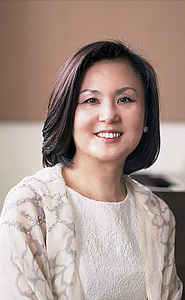 ... studied voice and piano at Yamagata University, Japan, followed by studies at the Nikikai Opera Institute in Tokyo. In 2004, she received a one-year scholarship from the Japanese Ministry of Culture to further her musical education and training in Europe. She studied in Vienna with Olivera Miljakovic and Margret Cahn and, in Belgium, with Prof. Zeger Vandersteene. She also has attended masterclasses with Ruth Ziesak, Yva Barthelemy, Ulrich Eisenlor and Jean-Nicolas Diatkine. Her extensive work with the singer Helen Donath and conductor and pianist Klaus Donath were a formative influence on her development as a singer. She is currently assisted in the development of her repertoire by Prof. Janet Williams.

Emiko Okuyama is active as a lieder and oratorio singer in Japan as well as in Germany. In Tokyo, she is also known for her vocal coaching and singing lessons, working both with choirs and in private instruction.

Successful recitals in Germany, including in Bremen, Brelingen, Erkelenz, Etelsen, Hanover, Hellwege, Hückelhoven, Lunsen, Mönchengladbach, Oyten, Worpswede, and Thedinghausen, have made her a sought-after lieder singer and have led to further engagements in Austria, Belgium and Japan, as well as NHK radio and CD recordings produced in Japan and Germany.

She has lived in Berlin since 2015, where she offers private instruction and serves as vocal coach to the Berliner Konzert Chor.