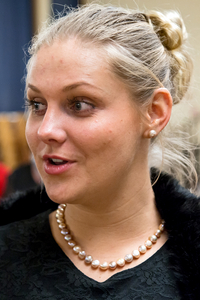 …grew up in Berlin, where she acquired her earliest singing experience already while in school.

She has been a member of the Berliner Konzert Chor since 2004 and previously was a member of the Primaner Chor at the Georg-Friedrich Handel School. She also received piano and guitar lessons. After earning her initial degree in voice, piano and music theory, she studied singing at the Lausitz University of Applied Sciences in Cottbus and founded the Lion’s Club Children’s Choir together with Jan Olberg.

In addition, she has participated in various opera and musical theatre performances, including The Water Carrier by Luigi Cherubini at Schlosstheater Rheinsberg and a starring role in the musical Wicked - Witches of Oz at the summer theater on Cape Arkona, before beginning her music pedagogy studies at the Lausitz University of Applied Sciences in Cottbus. In 2009 she sang as a soloist in the Oratorio de Noël by Camille Saint-Saëns in the Konzerthaus Berlin and in 2010 in the Christmas concerts of the Konservatorium Cottbus.

In 2011 she was a member of the chorus in Aida at the Staatstheater Cottbus. Norienne Olberg is a member of the Chamber Choir of the Singakademie Cottbus, sings as a soloist with young artists at Schloss Branitz, participates in the chamber concerts of the Collegium musicum Cottbus, and continues to supervise the Lions Club Children's Choir.