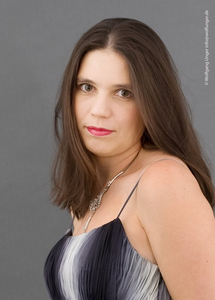 … received her first voice lessons at the age of 11, from Mrs. Lydia Wutzler at the Fürstenwalde Music and Arts School. From 1992 to 1993 she also received lessons from the chamber singer Wolfgang Hellmich (Komische Oper Berlin). By the time she began her professional training she had already participated in numerous opera productions at the Kleist Theater in Frankfurt (Oder), where she also gained her first experiences as a soloist.

In 1993 she began her studies at the Hans Eisler School of Music in Berlin with Magdalena Hajossyova (Berlin State Opera) and participated in numerous scenes and opera performances, including a staging of Broken Strings, by Param Vir, a coproduction of the School and the Berlin State Opera. She dedicated herself to the study of lieder in the classes of Eric Schneider and Wolfram Rieger. She completed her degree in concert and opera voice in 1998.

Further studies led her to the Opera School of the State School für Musik in Karlsruhe, where she worked with Renate Ackermann and Roland Hermann.

Andrea Chudak is the recipient of numerous prizes at national and international competitions, among others, the International Emmy-Destinn Singing Competition in České Budějovice (Budweis). She has also participated in masterclasses with Elio Battaglia, Magdalena Hajossyova, Roland Hermann, Elisabeth Schwarzkopf, Peter Schreier, and Ira Hartmann-Dressler.

Her various engagements have included the Festival of European Music in the Meistersaal Berlin (1998), the festival Les Notes en Bulles in Auray, France (2000), Klangwerkstatt 2004 – the Festival for New Music Berlin, the festival Lied: Strahl 2007 in Kempten, the Festival Schloss Britz in Berlin, and the Kleistfestival of the Maxim Gorki Theater Berlin.

In 2003 she released her debut CD Zwiegespräche under the label Bella Musica, with songs and duets for soprano, tenor and piano; 2009, also Bella Musica, saw the release of her CD In the Grass I Lie, with songs for soprano and guitar; 2010, the CD Jacob’s Dream, with music by Max Doehlemann; 2013, the CD Carl Maria von Weber - Lieder for Soprano and Guitar; and in 2014, the CD Giacomo Meyerbeer - Lieder for Soprano and Piano.

In 2017 three further recordings are planned. One will include the song cycles of contemporary Berlin composers and will appear under the AMA label; another is to appear under the cpo label with cantatas by F. Danzi and F.E. Fesca, and the third will be released with Bella Musica under the title Through the Night with Robert Schumann.