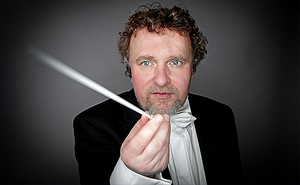 Born in Berlin in 1963, Jan Olberg was led by talent and inclination at an early age to music. After lessons in piano and the French horn at the Berlin-Treptow Music School, his education continued with special classes for music education and participation in the Wernigerode Radio Youth Choir at the magnet school for music in Wernigerrode, in the Harz Mountains. As a member of the Radio Youth Choir, he received his initial choirmaster training from Friedrich Krell. At the Liszt School of Music in Weimar, Olberg studied choral conducting with Martin Klaus from 1983 to 1988 and graduated with a degree in choral conducting. In 1989 Olberg founded the vocal quartet Opus Vier and was a member and its artistic director until 1993. To further strengthen his skills, he studied orchestra conducting from 1991 to 1996 at the Academy of Music Hanns Eisler with Prof. Hans-Dieter Baum. This training was followed by further studies with well-known conductors, including Robert Sund and Gabor Hollerung. While at the university, he also studied as a vocal student with Prof. Renate Faltin.

Olberg went on to serve as pianist with the Berlin Radio Children’s Choir for more than 13 years. Concert tours took him to Japan, Taiwan, the USA and Russia. In 1995 he became director of the Primaner, the youth choir at the Georg-Friedrich-Handel Magnet School for Music in Berlin. Under his direction, the Primaner developed into a first-class musical ensemble that continues to win first prizes and recognition in international choir competitions around the world.

Parallel to his work at the music school, Jan Olberg took over the direction of the Berliner Konzert Youth Choir in 1998. Thus his work and artistic talents were already well k when he successfully applied, in 2001, to assume the position of artistic director of the Berlin Concert Choir. Under his leadership, the Choir has remained true to the traditions of its sixty-year history and has also broken new ground in vocal training and repertoire design.

Jan Olberg is a regular participant as instructor at the annual Berlin choral conducting seminar; artistic director of Sing Berlin!, the international choir festival in Berlin; and the 2018 recipient of the Advancement Award of the Music Academy Rheinsberg.