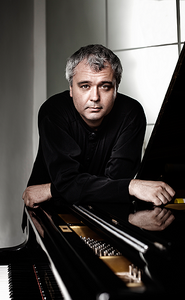 ... was born in 1976 in Leningrad, where he received his initial musical education (specializing in voice and choral conducting) at the Mikhail Glinka School, Russia’s oldest music school, from 1983 to 1994. In 1999 he successfully completed studies in conducting and in 2001 a course of study as concert pianist, chamber musician and recital accompanist at the St. Petersburg Rimsky Korsakov Conservatory. In 2000 he began his piano studies at the Folkwang Hochschule Essen under Prof. Boris Bloch, graduating in 2003 with honors. This was followed by conducting studies at the Hochschule für Musik in Cologne. He came to the Staatsoper Berlin, via stops in Trier and Osnabrück, in 2010 as repetitor and musical assistant. His debut as conductor at the Staatsoper Berlin followed in 2012.

In 2008, Andrei Diakov took first place – the Bösendorfer Prize – in the prestigious Belvedere Competition in Vienna in the category of correpetition, the only competition of its kind for opera pianists. He has composed music for Ephraim Kishon’s work It Was the Lark, which successfully premiered in October 2006 at the Theater Eisenach.